Lurking within the shadows of Tokyo are frightening beings known as “ghouls,” who satisfy their hunger by feeding on humans once night falls. An organization known as the Commission of Counter Ghoul (CCG) has been established in response to the constant attacks on citizens and as a means of purging these creatures. However, the problem lies in identifying ghouls as they disguise themselves as humans, living amongst the masses so that hunting prey will be easier. Ken Kaneki, an unsuspecting university freshman, finds himself caught in a world between humans and ghouls when his date turns out to be a ghoul after his flesh.

Barely surviving this encounter after being taken to a hospital, he discovers that he has turned into a half-ghoul as a result of the surgery he received. Unable to satisfy his intense craving for human meat through conventional means, Kaneki is taken in by friendly ghouls who run a coffee shop in order to help him with his transition. As he begins what he thinks will be a peaceful new life, little does he know that he is about to find himself at the center of a war between his new comrades and the forces of the CCG, and that his new existence has caught the attention of ghouls all over Tokyo. 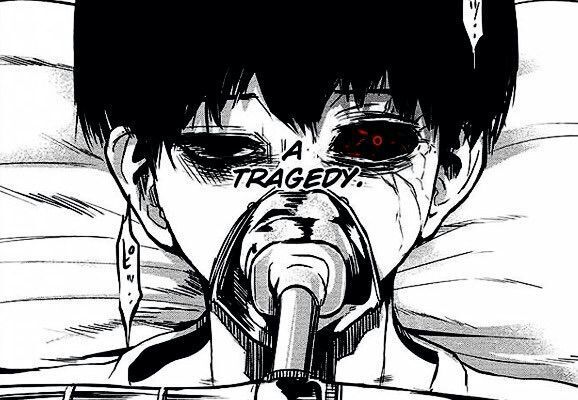 If the anime adaptation was depressing, then the manga was crazy. That does not mean that the manga wasn’t depressing enough, because it still is. Seeing how Kaneki desperately seeks for every little thing that makes him human is really sad. In fact, that feeling was intensified in the manga. Kaneki’s inner thoughts are written so you know how much he tried to cast away the fact that he turned into a ghoul. I wouldn’t know who went through worse. Kaneki, who lost his humanity, or the other ghouls, who have never felt what it is like to be someone that the society does not despise.

Maybe I just forgot how Kaneki was like in the anime because I watched it when I was in 8th grade, which was 3 years ago, but I really think that Kaneki’s brain is more twisted in the manga. He smiles cutely, yet he thinks like psycho. He imagines how he would murder a person in the most brutal way possible. And honestly, I love that side of him. Whenever he laughs while killing someone, my heart pumps a beat faster, and whenever he mentions some sick line when he’s about to eat his prey, I just can’t help but smile. I never liked cannibal psycho killers, but Kaneki is different. He went through a lot and seeing how he changed satisfies me. He is still kind, but when someone triggers a switch inside him, he completely transforms.

Overall, I can’t really say what’s better, the anime or the manga. But personally, I loved the manga more, though there are scenes in the anime that I think are better, especially the fight scenes.

Favorite Character: Kaneki Ken (I’ll always love him no matter how twisted he is)

Tell me who’s your favorite character in the comments section below.

10/10 I know I said that there are parts in the manga that are better in the anime, but I never did and would never say that it’s average or below average because every part of the story is still awesome and heart wrenching.

You also have the right to chill and do something you love for yourself, so here's some anime. You're welcome. Reply to me in the comments. Thanks a lot!